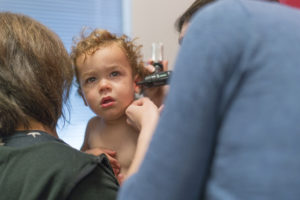 Ear infections, or otitis media, are the most common reason caretakers bring children to the doctor. Lasting from a few days to six weeks, ear infections in children are often painful, and in some cases can cause temporary hearing difficulties.

Otitis media occurs when fluid builds up behind the eardrum. Most commonly, bacteria or even a virus becomes trapped with the fluid and causes painful inflammation.

Children, in general, are more likely than adults to develop ear infections, and some children have an even greater risk than others. Here are a few contributing factors.

Children are far more likely than adults to get ear infections because of their anatomy: children’s still-developing eustachian tubes are shorter and more horizontal, giving bacteria easy access to the middle ear. Narrow eustachian tubes combined with large adenoids (glands near the back of the throat) prevent drainage of pus and other fluids, further promoting infection. By their third birthday, five out of six children will have experienced an ear infection– ultimately, simply being a child increases the likelihood of an ear infection.

However, there are some environmental factors that increase the likelihood of an ear infection:

Bottle feeding increases the risk of ear infection — children who take a bottle to bed or who lay flat on their backs while feeding are more likely to develop ear infections. Consider breastfeeding for promoting bacterial immunity, and when bottle feeding, hold the infant at an angle to keep fluids away from eustachian tubes.

Group childcare can be a hub for children to share infectious illnesses, although some studies show that kids who get more illnesses in daycare end up getting sick less when they begin elementary school.

Ear infections occur when fluid and bacteria buildup causes inflammation in the eustachian tube– therefore, any condition that would cause swelling or increased mucus in the sinuses or would make ear infection more likely.

Colds are viral but can lead to mucus buildup and trigger a secondary bacterial or even viral infection in the ear. When ear infection occurs alongside a cold, doctors will often not prescribe antibiotics and instead only offer pain management techniques.

Upper respiratory and throat infections are also caused by bacteria, which can easily spread to a child’s eustachian tubes.

Certain factors make some children more likely than others to be recurring patients. Learning where the infections possibly originate can help caretakers understand, treat and prevent ear infections.

View all posts by deanh →