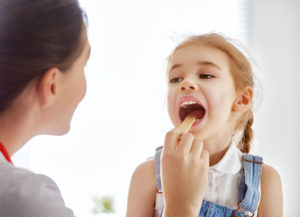 More than 500,000 tonsillectomies are performed each year on children. While tonsillectomies used to be far more commonplace, it’s still one of the most common pediatric surgeries performed in the United States. Palm Beach Sinus Doctors are here to treat all your tonsillitis symptoms.

Tonsils are small organs located in the back of the throat and are part of the lymphatic system. Doctors once considered tonsils useless and would often have them removed if they became inflamed or infected. Now we understand that tonsils are an essential part of our bodies.

Palatine tonsils are clusters of lymph cells about the size of a pea on both sides of your throat. They appear very large in children because tonsils usually get smaller as you reach adulthood.

Even though they are small and we used to consider them useless, the tonsils are the first line of defense for our immune system. They produce disease-fighting white blood cells. Tonsils also “sample” bacteria and viruses as they enter our bodies through the mouth or nose then “flush” the viruses or bacteria using a clear fluid called lymph.

The “flushing” function makes tonsils more prone to infection, particularly in children, because their developing immune systems haven’t been exposed to many bacteria and viruses yet. The tonsil’s immune system function is most active before puberty.

Tonsillitis is the most common issue people experience with their tonsils. It is an inflammation of the tonsils. Tonsilitis is easily treated with home remedies like gargling salt water, taking over the counter pain medications, and sucking on throat lozenges.

Even though tonsillitis is common and easily treatable, if you experience more than seven infections in one year or 5 infections per year for two years, the doctor may recommend a tonsillectomy.

Strep throat develops when the Streptococcus bacteria infect the tonsils. Children most frequently get strep throat, but adults are not immune to the infection. Strep causes the tonsils to become infected and very inflamed. White pustules may develop on the tonsils or there may be white pus in the throat.

Tonsil stones are another common problem. The stones develop in the tonsils when food or debris gets stuck in the grooves on the tonsil. White blood cells attack the debris and create a little, rock-like stone.

Tonsil stones are usually easy to remove with brushing or a water pick. Your dentist might also remove them.

What is a tonsillectomy?

A tonsillectomy is the surgical removal of the two tonsils at the back of your throat. It was once a very common procedure to treat strep throat and tonsillitis. Now doctors tend only to perform tonsillectomies to address the most severe cases. Tonsillectomies are more frequently performed in people who suffer from obstructive sleep apnea.

Tonsillectomies are performed under general anesthesia so you won’t be awake during the procedure. Once under anesthesia, the doctor will cut out the tonsils with either a scalp or another tool that uses ultrasound, laser, or cold temperatures. All four options work well and have about the same amount of recovery time.

The surgery lasts between 20 and 45 minutes, and most patients spend several hours in a recovery room before going home. Young children might spend the night in the hospital for observation or if there were complications during the procedure.

Nausea and vomiting are common side effects of general anesthesia that may last for several hours. You will likely have a severe sore throat and possibly some pain in your ear, neck, or jaw.

Recovering from a tonsillectomy

Your doctor may prescribe pain medication or suggest an over the counter option. Recovery typically takes between 10 and 14 days for children. It may take a bit longer for some adults to return to normal.

It is essential to drink plenty of fluids during recovery even though it’s painful to swallow at first. Popsicles and cold liquids will soothe the sore throat and help with the swelling.

Choose soft, plain foods that are easy to swallow like applesauce, pudding, and soups for the first few days. As you begin to feel better, you can work your way back to a regular diet.

Your body needs quite a bit of rest to recover from even minor surgery. Children and adults should avoid any hard exercise for at least two weeks. Most doctors agree that you are ready to return to your typical routine when you can eat and drink normally, you are sleeping through the night, and you are no longer taking any pain medications.

How much does a tonsillectomy cost?

The average cost of a tonsillectomy is around $5,000. Most are covered by insurance if your doctor deems it necessary.

What are the risks of a tonsillectomy?

The most significant risk of a tonsillectomy is bleeding. About 1% of patients experience severe bleeding and require medical intervention. Other risks include infection and dehydration.

Are there alternatives to a tonsillectomy?

Antibiotics and other medications effectively treat tonsillitis, but if you have chronic issues with your tonsils, then there may be no other alternative than to remove them.

Most doctors will only recommend a tonsillectomy after trying all other options. Chronic tonsil-related problems in children can affect their overall health, sleep, development, and performance in school.

View all posts by deanh →